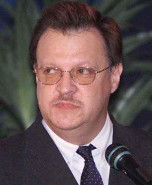 Doctor of History, Deputy Director for Development of the Institute of Oriental Studies, Russian Academy of Sciences.

For many years Dr. Sautov was a General Director of Russia-ASEAN Cooperation Fund, and a member of state Commissions of the Russian – ASEAN / APEC Partnership.

In 2015 he was nominated by the Ministry of Foreign Affairs of Russia as a member of Russia-ASEAN Eminent Persons Group.

Since 2013 Dr. Sautov is a Chairman of the Business council for cooperation with Malaysia.

Vice-President for Marketing and External Relations of Irkut Corporation.

Has number of state and government awards.

Has multiple publications on a range of issues related to contemporary affairs as well as history and religion of the Middle East and Asia.